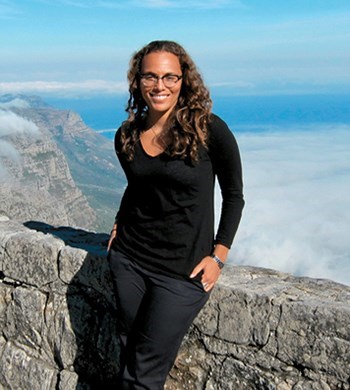 Aboard the Trans-Siberian Express

I have been traveling ever since I was a child, but one trip which has always stayed with me was an around-the-world journey I took with my boyfriend. A highlight was taking the Trans-Siberian Express to Beijing, starting in Saint Petersburg and then going from Moscow to Irkutsk to Mongolia.

Mongolia was like nowhere else. You can literally see the curve of the earth because the sky seems to stretch endlessly and there is nothing to obstruct your view. We then went into China, where I had spent a year teaching English when I was 18. It was interesting to go back years later and see how what had changed and what had remained the same.

The absolute highlight for both of us was Tibet. The people were wonderful, and the culture and scenery were awe-inspiring. We stayed overnight a few miles south of Everest base camp, where the high altitude was a bit of an adjustment for me. But waking up in the morning and seeing the sun rise over Everest is something neither one of us will never forget.

We carried on with the rest of our around-the-world trip, through Southeast Asia, Australia, and Japan. Afterward, we flew to Los Angeles and spent three months driving around the United States. Finally, my boyfriend and I got married, because we figured that if we still liked each other after a year of circling the world together, then it was meant to be.